Math games using a standard deck of cards can help your kids learn and review math concepts, plus have some fun. Beyond modifications to old faves like Go Fish, War, or Concentration, the following games provide a variety of computational challenges, and can be adapted to various age groups.

Remainder Jump: This game uses playing cards plus a printable game board to review division and the concept of remainders. The object of the game is to be the first player to reach "Finish," so players must develop good strategies to move the farthest on the board. They'll be dividing, subtracting, and thinking about factors of numbers, plus honing their mental math abilities. Other free math games, puzzles, and worksheets are available at the site, called Beast Academy. You can also print out their standard deck of Beastie cards.

Sum Memory: For addition practice, find pairs that add up to 5, 10, or other target number.

OrdOp: Use a standard deck to practice order of operations and computational skills. This version includes a printable set of cards numbered 1 - 25. Here’s a video showing how to play:

Bino: Players try to make combinations of cards that will give them the most points, using both ordinary and binary numbers.

Dice and Card Games: This 11-page PDF includes a single-player solitaire-style game for studying sums or multiples of numbers; Go Fish, Concentration, and War variations; other addition and multiplication games.

Acing Math: This 69-page download features a collection of card games categorized by grade, and covering the core processes, plus other areas such as fractions, percents, decimals, positive and negative numbers, patterns, place value, exponents, and others.

Two Math Games With Cards You Can Easily Make:

Easy Piecy Decimals: You’ll need to make a deck of 20 or more playing cards with monetary decimal values between $0.00 and $1.00 to two decimal places. A 10-sided die is also needed, and you can print one here. The object is to practice adding, subtracting, and rounding simple decimals. Links to additional resources to teach decimals are listed.

Algebra Rummy: This game’s goal is to get players more familiar with algebraic terminology. You need to create a 54-card deck with algebra terms. Play is similar to standard Rummy, except you’ll be forming sets of 3-or-more like terms (3y, 5y, 6y), or like coefficients (4x, 4y, 4xy).  Game can be extended by forming equations. Includes a list of algebra terms and links to additional resources. 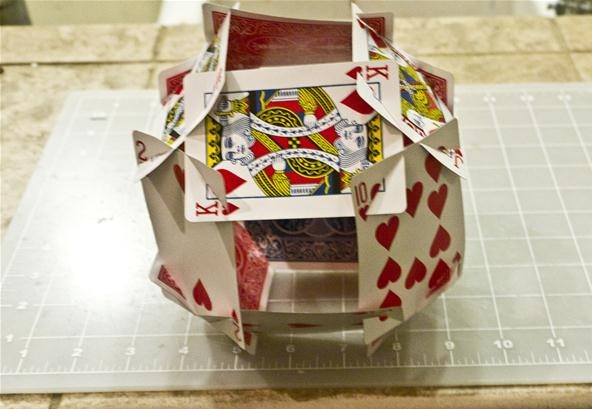 Make Platonic Solids With Cards: Not really a game, but a twist on building with cards. Downloadable template and instructions for forming a cube, tetrahedron, octahedron, dodecahedron, and icosahedron out of playing cards. Make cuts and slide them together -- no glue needed.